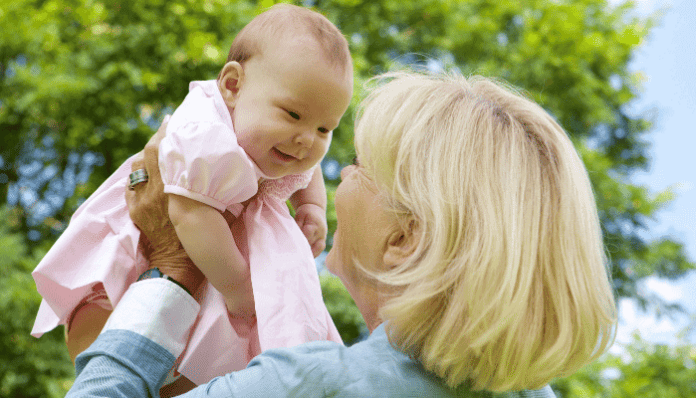 Understanding the mental development of your grandchild can make you a better grandparent, whether you babysit occasionally or have found yourself unexpectedly raising a grandchild. Yes, much of child-rearing is the same, but some things have changed. Today, neuroscientists understand how an infant’s thinking evolves over time. Pediatricians can now suggest ways parents can help grow their baby’s brain. As a grandparent, you can use these same tips to ensure your grandchild hits their cognitive and emotional milestones. Here are seven things you should know about your grandbaby’s mental development for the first year of his or her life.

The first three months of your grandbaby’s life is all about developing the five senses. In the womb, our senses are yet ready to take in the new world. And it takes a little time after birth to get up to speed. But while our senses are limited, they’re also extremely sensitive. Loud noises, bright lights, warm or cold surfaces, and strong smells all affect infants much differently than adults.

At first, your grandbaby’s vision is blurry and near-sighted. Objects appear fuzzy, and bright lights can overwhelm their sensitive eyes. He or she responds best to simple, high contrast images (e.g., black and white circles) that come with 8 to 12 inches from their face. High contrast images are much easier to “read” for an infant. And they help your grandbaby detect your face (their favorite object) and identify you as a source of comfort.

Early on, your grandbaby can’t distinguish between low and high pitched sounds. There’s no difference between the sound of your voice and that of running water. And babies may perceive many everyday sounds as “loud” when banged against new, sensitive eardrums. Even multiple soft noises can be overwhelming. But as his or her hearing becomes more fine-tuned, your grandbaby will begin recognizing your voice and turning their head to locate you.

Here are some ways to help promote your grandbaby’s cognitive development during the first three months:

Now that your grandbaby has developed over the past three months, he or she will continue to explore their new world with heightened senses and more curiosity. Their physical activity and strength will grow, along with basic communication. Here are some new abilities to look for.

Your grandchild’s color vision will also improve, and they’ll start to enjoy bright colors. They will begin to distinguish between shades of primary colors. So, a bright red ball will appear different than a dark red one. The baby may now enjoy high contrast objects with more complex patterns and shapes.

With better physical coordination and focus, your grandchild will now actively reach for and grasp objects. That’s because their depth perception has now formed. Around the fifth month, a baby’s eyes and brain start to perceive a three-dimensional world. And a child will explore this new layer of depth, bringing everything is touches to its mouth. This is when child-proof households become most important.

Physically, a four to six-month-old grandbaby will be more active. Kicking their legs and flailing their arms is now common. The neck muscles are strong enough to hold their head up while lying on their stomach. And their head coordination and object tracking is more advanced. If you held a toy in the air and moved it from side to side, your grandchild will likely be able to turn his or her head to follow it.

Here are some tips to promote your grandbaby’s cognitive development at four to six month:

By a year old, you grandbaby will have mastered saying basic words (e.g., “moma” “dada”). And they will have full control of grasping, holding, and manipulating objects. Plus, they may be leaving the crawling stage and able to pull themselves to a standing position. During these months, your grandbaby will also take two large cognitive steps. They will gain object permanence and self-awareness.

Object permanence is the ability to understand that when objects or people disappear, they’re not gone forever. That is, before your grandchild attains object permanence, they really think you’ve disappeared when you play peek-a-boo. If the bottle isn’t in sight, they think it no longer exists — hence the crying. By around seven months, baby will understand this isn’t the case.

An infant around seven to twelve months doesn’t distinguish between itself and the world. That is, he or she isn’t yet self-aware. Before this cognitive breakthrough, infants sense themselves as part of everything else. When they become aware of themselves, you will often see them staring at their reflection in a mirror or shiny surface. This “mirror stage” means that baby can also identify grandma and grandpa as separate people. As such, they will probably begin to imitate you doing simple activities like using your phone.

Here are some tips to promote your grandbaby’s cognitive development at seven to twelve months:

Use these seven developmental stages to help grow your grandbaby’s brain. But remember: children develop at different times. So, your grandchild may or may not follow this timeline. Don’t get worried if they seem a little behind schedule and begin to force things. A child who hasn’t attained object permanence yet won’t cognitively benefit from a game of hide-the-ball. That doesn’t mean you can’t play it for entertainment or simple interaction. Just don’t expect your interactions to push your grandchild into a higher cognitive stage. Forcing things will only lead to frustration and confusion. It’s not about helping them achieve a stage; it’s about getting the most from it when they’re there.

Hilary is a freelance journalist and mother of two who loves to write about everything from senior health to business, tech and parenting. Coffee is her friend. You can follow her on Twitter @TypewriterHil.