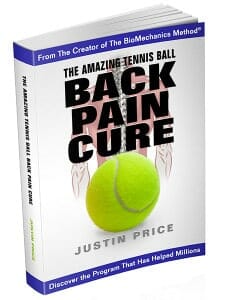 The Amazing Tennis Ball Back Pain Cure was written by Justin Price, one of the worlds’ top experts on joint and muscle pain. This easy-to-follow book from Justin Price, creator of The BioMechanics Method® and one of the world’s top back pain experts is the ultimate guide to helping you overcome back pain. Unlike other books on back pain relief that require you to do dynamic stretching or strengthening exercises that can make the problem worse, The Amazing Tennis Ball Back Pain Cure provides you with simple techniques and soothing exercises that address the underlying cause of your pain and prepare your entire body to move without the constant discomfort that has become an unwanted part of your life.

If you want to get rid of your back pain naturally and for good, you must address the two most prevalent causes of pain (overworked muscles and irritated joints) before you start putting your body under the stress of traditional exercises. Justin has spent more than 20 years helping people put an end to chronic pain with his easy, insightful, and intuitive tennis ball program and he has taught his remarkable techniques to other health professionals around the world who use them to successfully eliminate their patients’ muscle, joint, and back pain. Now his methods are available to you in this truly amazing book.

The way The Amazing Tennis Ball Back Pain Cure works is simple. You use a tennis ball as a tool for self-massage in strategic areas around the body.  Knowing exactly where to place the ball and how to perform the easy techniques in this book can bring about incredible relief from:

It really is possible to cure your back pain with a tennis ball. So stop living with pain and get back to enjoying the things in life you love. Get The Amazing Tennis Ball Back Pain Cure today.

Confusing the Enemy: The Cus D’Amato Story

Confusing the Enemy: The Cus D’Amato Story (Acanthus Publishing 2013), paints the story of one of the greatest trainers in the sport of boxing.

Captured throughout this book are the footsteps of some of the greatest fighters to have ever stepped into the ring. Mike Tyson advanced the sport of boxing to where it is today, but his mentor, who declined the opportunity to train Cassius Clay, is often overlooked. This book celebrates the life of Cus D’Amato. A fighter of a different fashion, D’Amato was a man whose strategy could shape a 200-plus-pound fighter into a champion.

As one of the toughest sports to conquer, boxing requires an everlasting amount of physical and mental strength. Outside the ring is no different, and one wrong move can mean a sucker punch throwing you right at the feet of the boxing business. Cus D’Amato found his own way to reach success in boxing, and as a result, his life was as intriguing as the sport itself. Through eleven years of research, Confusing the Enemy traces the complexities and controversies of D’Amato. From the street fights that caused his partial blindness in his right eye to the Victorian house where D’Amato adopted a young Mike Tyson, this book chauffeurs the reader through a time when boxing was reaching its main stage. Confusing the Enemy: The Cus D’Amato Story is a great Valentines Day gift for the health-conscious, sport-enthusiast that enjoys a refreshing story.

Audiobooks.com provides the first on-demand streaming and downloadable service for audiobooks, delivering access on any Internet-enabled smartphone or PC, including Apple iPhones and iPads and Android smartphones or tablet devices. The company is the first and only provider of Cloud Bookmarking, its proprietary technology that synchronizes users’ last listened-to bookmark position across all devices. Find out more at www.Audiobooks.com.

To better support both streaming and downloading on the go, Audiobooks.com just announced the release of updated versions of the company’s free iOS and Android apps. Featuring an intuitive new user interface, the newly released apps are available at Apple’s App Store for iPhones, iPod Touch and iPads or at Google Play for Android devices. Members can use the apps to stream content on demand, choosing from tens of thousands of audio book titles like The Hunger Games trilogy and the Twilight series as well as popular best-sellers such as Ender’s Game by Orson Scott Card, Orange is the New Black by Piper Kerman andHidden Order, a thriller by Brad Thor.

The new versions of the Audiobooks.com apps are available now for free at the Apple App Store or Google Play, providing an improved user experience for members to stream audiobooks on demand or download content. To learn more, please visit www.Audiobooks.com.

The author, BT Rockwell, was featured in TIME magazine when Wu Tang’s album got best Hip Hop album of the year a few years back. Now he’s penned his first book, a fiction novel called BURN ME UP FAST (January 1, 2015) which chronicles a coming of age tale of protagonist Byron Bella, who grows up in the music scene and has difficulty navigating both youth culture and the drug culture that hides in the shadows of the music industry.

“Do Ferrets Fly?” was published in January of this year and is selling on Amazon. It is both entertaining and informative. There is little known about ferrets and they are often misunderstood animals. Beautifully illustrated, each page has a hidden sock for children to find!

The Brooklyn Iceman by Anthony Dipello

The Brooklyn Iceman is a colorful saga spanning the 20th century from 1915 through the 1980’s, using one man’s experience to illustrate many of the important historical and cultural events of the era from the perspective of a pragmatic and amoral individual.

Dipello’s story defines the journey of the first, second and future generations of Italian immigrants in their quest to establish good and secure lives for themselves and their families. Although this is a work of fiction, many of the characters are historically correct (including Jimmy Walker, Fiorella LaGuardia, Gino Morelli, Al Capone).

As the Season of Giving approaches, we should make a concerted effort to say “thank you” to the brave men and women who serve in our nation’s military.

In his new book, VALOR (Taylor Trade), Mark Lee Greenblatt explores some of these heroes, telling the thrilling stories of nine brave Americans who risked their lives to accomplish a mission or to save the lives of others.

Readers of VALOR will be transported to a variety of settings and look through the eyes of the individual soldiers, sailors, and Marines as they face gut-wrenching decisions and overcome enormous odds. A few sample highlights from the book, which Greenblatt modeled after John F. Kennedy’s Profiles in Courage, include:

VALOR is an amazing illustration of the bravery shown by true American heroes under the most harrowing of circumstances. It is a classic portrayal of their love and dedication to the country they serve and the service men and woman who stand by their side.

Marcia Gloster was a college student traveling through Europe in the summer of 1963. When she arrived in Salzburg, Austria to study at Oskar Kokoschka’s School of Vision, she envisioned a month of intensive painting, never expecting to find herself swept into a passionate affair. Nor did she imagine her lover to be a married instructor with a long history of indiscretions. Even at a young age, Marcia knew how to protect her heart. But it had never been taken by a man as overwhelming and sensual as Bill Thomson.

“31 Days” gives the reader a glimpse into Kokoschka’s famous, and infamous, school and paints an intimate portrait of the artists with whom she shared the seductive Salzburg nights. Two decades after WWII, she observes the tensions and mysteries of an era in flux. Above all, she exposes the naïve curiosity of a young art student willing to take chances and discover a new world of love and sensuality.

A new book by acclaimed author and photographer, Kerri McCaffety, “Luxury” pairs gorgeous photographs of two of New Orleans’ most majestic historic landmarks with captivating accounts of the turbulent times of antebellum New Orleans. The Hermann-Grima + Gallier Historic Houses have been preserved and restored to their original glory thanks to The Woman’s Exchange, one of the oldest continually run nonprofits owned and operated by women.

RUMBLE! How Boxing’s Greatest Match Was Made

Originally published in 2010 as From the Corners of the Ring to the Corners of the Earth: The Adventure Behind the Champions, this is the hilarious, thrill-a-minute story of how a Jewish engineer from Brooklyn came to be the promoter of the most famous fights in boxing history – the Ali-Foreman Rumble in the Jungle. The hoops Hank Schwartz jumped through to pull it off make for an over-the-top, page-turning story that features Muhammad Ali, George Foreman, Joe Frazier, the unscrupulous dictators of developing nations, the biggest banks in the world, Howard Cosell, and, of course, “Mr. Self-Promotion,” Don King.

RUMBLE! How Boxing’s Greatest Match Was Made (Acanthus Publishing, 2014) was the winner of the Gold Medal at the 2010 Independent Book Publishers Awards.

“The Berlin Candy Bomber” is a love story—how two sticks of gum and one man’s kindness to the children of a vanquished enemy grew into an epic of goodwill, spanning the globe—touching the hearts of millions in both Germany and America.

In June of 1948, Russia laid siege to Berlin, cutting off the flow of food and supplies over highways into the city. More than two million people faced economic collapse and starvation. The Americans, the English and the French began a massive airlift to bring sustenance to the city and to thwart the Russian siege.

Gail Halvorsen was one of hundreds of U.S. pilots involved in the airlift. While in Berlin, he met a group of children standing by the airport watching the incoming planes. Though they hadn’t asked for candy, he was impressed to share with them the two sticks of gum he had in his possession. Seeing how thrilled they were by this gesture, he promised to drop more candy to them the next time he flew to the area.

True to his word, as he flew in the next day, he wiggled the wings of his plane to identify himself and then dropped several small bundles of candy using parachutes crafted from handkerchiefs to slow their fall. Local newspapers picked up the story. Suddenly, letters addressed to “Uncle Wiggly Wings” began to arrive as the children requested candy drops in other areas of the city. Enthusiasm spread to America, and candy contributions came from all across the country. Within weeks, candy manufacturers began donating candy by the boxcar.

In May of 1949, the highway blockade ended, and the airlift ended in September. But the story of Uncle Wiggly Wings and the candy-filled parachutes lives on—a symbol of human charity.

“The Berlin Candy Bomber” is available at The Marketplace by The Blaze, Barnes and Noble, Deseret Book, Costco, Books and Things and many other great bookstores.