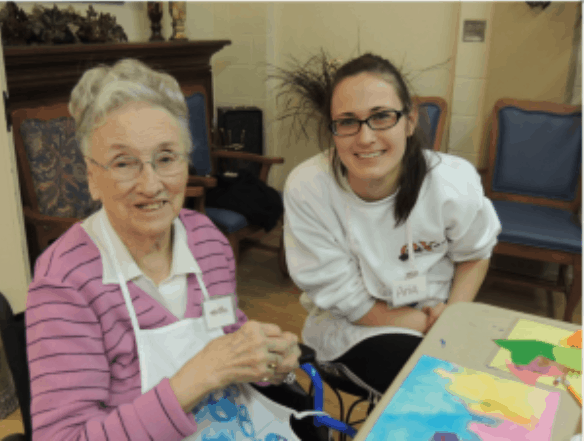 Although art therapy is not a new addition to nursing homes and memory care residences, one Ohio organization has been elevating the practice to new heights of interaction and study, with a “person-centered” approach.

Opening Minds Through Art (OMA) is the brainchild of Dr. Elizabeth Lokon. Under her direction, OMA has allowed Ohio seniors (and beyond) to express themselves through visual art while making some new friends in the process.

Now in its tenth year, the group was recently in the national spotlight. Earlier this year, OMA was awarded the 2016 Rosalinde Gilbert Innovations in Alzheimer’s Disease Caregiving Legacy Award in the Creative Expression category, presented by The Family Caregiver Alliance, National Center on Caregiving and The Rosalinde and Arthur Gilbert Foundation.

Lokon hopes through the expansion of this art-making program, and the study of its effects, dementia patients will be able to recapture just a bit of themselves lost to the disease.

Around dining tables and in nursing home common rooms, elder residents sit with their painting aprons on. Next to each of them are significantly younger art companions in matching aprons. An OMA session has begun. There’s no painting happening yet, however. Sessions are never rushed. Instead, the volunteer companions, some as young as high school aged, sit and talk to their older counterparts. They have a lot to discuss. These volunteers aren’t meeting the seniors for the first time. They’ve been matched up together for 12 weeks. That’s a lot of painting and a lot of talking.

Lokon explains that this one-on-one connection is an essential part of the program. “They really get to be friends with one another and it becomes a mutual relationship, even if they [the elders] can’t remember someone’s name, they still light up when they see them.” Bonds, in fact, that have led some volunteers to return for subsequent sessions to maintain the friendships they forged. 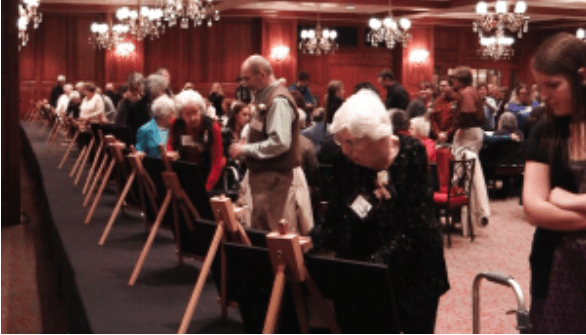 Group painting is an important part of the OMA philosophy. Photo credit: Opening Minds Through Art

The program is a culmination in many ways of Lokon’s various studies. She began her academic career at Berkeley where she studied Fine Arts. She taught for several years after that, eventually earning a Ph.D. in Education. “I went back to school to study aging,” explained Lokon. “In education, we only focus on younger people. I decided to study gerontology to learn just what’s going on in nursing homes and their living conditions.”

Growing up in Indonesia, Lokon said that her childhood showed her a very different approach to aging than what she eventually came to find in the nursing home settings of the U.S.

“I saw people with dementia weren’t given the opportunity to succeed,” said Lokon. “They are typically given a lot of busy work and they end up falling asleep, which is not a surprise because they were bored.”

Combining her backgrounds in art and education, Lokon asked herself the questions she would typically ask about school-aged students — “Where are my students coming from what?” “What sets of abilities and disabilities do they start with?” and designed a program as her graduate thesis. And so OMA, which means “grandmother” in Dutch (drawing on Lokon’s Dutch colonial upbringing in Indonesia) was born.

What began as a pilot program with one location at the Scripps Gerontology Center of Miami University in Ohio has expanded to over 50 different locations, including six in Canada and an initiative to put OMA in 102 new nursing homes in the state. Lokon said this is due in part to  state’s growing push to be a national model, the first to combine dementia care and the arts on such a scale.

As inspiring as the visual arts can be. It can also be quite frustrating and challenging. Have you ever sat down and tried to sketch something only to find the end result looking nothing like what hoped?

OMA dispenses with any of the typical intimidating parts of creating art. First, by only working in the more abstract, free-form world of modern art. And two, by making sure the volunteer assistants are heavily trained in how to bring out the most creativity in an easily accessible way. “[The volunteers] learn how to support the independence of people with dementia, to slow down, to allow them to have choices,” explained Lokon. “It doesn’t require them to know how to draw a bird or something like that. We don’t care about those things they can’t do. What we care about is their playfulness, their imagination.”

Lokon and her team test each art project before they introduce it to their classes. Each project is broken down into a series of steps. For one project, participants first paint a watercolor background. They choose what color they want to use and the volunteer loads up a paintbrush full of that color paint. And the elder paints. Then the painter gets to choose a stamper. The volunteer asks, “Do you want to use this stamper here or the other one.” Participants get to make “one or the other” type of choices to keep them in control without overwhelming.

“Where to stamp the paper, how often to stamp —  all of these things become built-in choices. Through that hour they’re continually engaged within their abilities. ‘I’m in control because I know what I’m supposed to do” — that feeling in control is important,” added Lokon. “In life, there are so many options, it becomes so overwhelming. We give them freedom by giving them structure.” She’s observed elders in the program who have become accustomed to the process and as a result, lose their hesitation and begin to feel more comfortable with what they are creating. “Some people say, ‘I didn’t know I could do this.’ or ‘Did I do this?’ said Lokon. “Some families say their loved ones have never been artistic before this.”

Lokon said that with dementia disorders, the loss is not just in remembering things. “Impairment is not just with memory, but all types of functionalities when the brain communication becomes difficult. How to dress for the season, when to do things, how to do things — all these things get impaired and then the reality is, people around them start making decisions for them, and then they stop being active on their own behalf.”

That loss of independence, loss of choice is a profound one. Many studies and books profess the psychological benefits and power of choice. Losing it can create a snowballing effect of depression, fatigue, hopelessness, and agitation. Giving choice back, in this case, within the structured setting of art creation, can be a powerful tool that goes beyond mental “busyness.”

What caregivers can do

Aside from the psychological benefits to the individual, Lokon points to the bond formed between caregivers and those living with dementia. “You keep doing spending time together like this and over time, you know how your loved one will respond. The volunteers become advocates and, because they have gotten to know them, can adjust things for their elders.”

Beneficial art programs like this aren’t just exclusive to OMA or to the nursing homes that offer these lessons. Lokon urges family caregivers and those that work with seniors to create their own classes. “If you go to the National Center for Creative Aging (www.creativeaging.org) there is a Creative Caregiving Guide, you create a profile and you will see nine different lessons including two or three from OMA.”

There are many ways to help a loved one express themselves: poetry, storytelling, dance, music, and theater. Not only are these activities proving beneficial to the elder students, but their companions seem hooked as well. The next time there doesn’t seem to be anything to talk about with an older loved one, it might be time to get a little creative.