Roger Herst has been writing popular books since the 1980s and his newest release, Nunavut: An Arctic Thriller (February 2015) takes place in the often un-recognized frozen tundra of the Canadian territory of Nunavut. This is a David and Goliath story of the Inuit people’s fight to protect their native land and waterways from a Russian conspiracy to steal its resources and wealth for themselves. It is also about the universal struggles of danger, love, politics, and the fight for survival.

SOT contributor, Christopher Cussat, recently sat down with Herst to pick his brain about this uniquely set and imaginatively conceived offering about an obscure place and its people.

Your latest book, Nunavut: An Arctic Thriller, obviously denotes its genre—thriller. Would you consider this novel to be your first exploration of this type of writing?

No. I have written a submarine novel, Ghost Sub, and an historical saga around the building of the railroad in California, Destiny’s Children.

What first interested you in writing within the category of thriller?

The skill of working with character and plot in strong action continuously draws the reader from page to page.

You have a diverse academic and professional background—how has your intellectual and experiential history affected and directed your writing?

To write as I wish, I must draw upon information gleaned in extensive reading, along with the experience of dealing with people who are quite different from myself.

As a Rabbi, how does religion/spirituality influence your writing work—if at all?

When I write Jewish books (not always) I rely upon my experience and academic background to make my novels credible and interesting. I try to keep my personal faith out of such writing because after all, I am not writing autobiography, but the stories of other people. 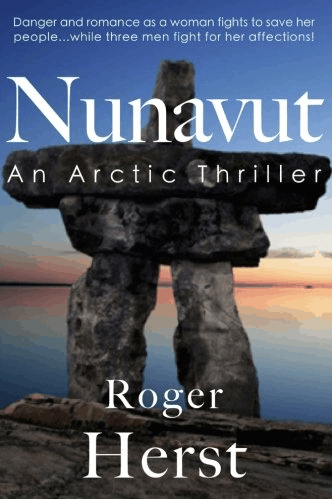 What inspired you to write Nunavut: An Arctic Thriller?

I read about Nunavut’s independence, the largest tract of land and sea ever in the history of the world given by a sovereign nation (Canada) to one of its indigenous peoples and thought what a great background for a good story. The fact that Nunavut is chuck-full of invaluable minerals at a time when the icecap is melting added to the fascination.

How does it differ from your other books and writings?

Nunavut deals with an indigenous Inuit people I had to learn about. I had already treated the arctic in my submarine novel, Ghost Sub, and therefore had some understanding of polar conditions.

In your own words, can you give our readers a brief, insightful, and summarizing “clip” of sorts about this book?

Nunavut tells of the trials of an emerging democracy among a small hunter-gatherer people who are suddenly thrust upon the world stage. Nunavut finds itself in the cross hairs of political and economic competition for its invaluable minerals.

Describe the type of person and reader who would be interested in reading Nunavut: An Arctic Thriller.

A reader who wants a fresh experience learning about an ethnic arctic population. No other novels have recently been written about this landmass, once frozen and inaccessible but now, due to global warming, in the center of a geopolitical intrigue.  Those who do not wish to visit this arctic region can experience the polar environment within a good story.

I try to combine fresh characters in novel situations. I promise you have not met these characters in fiction before, though you can still identify with them. The plot itself is a good old-fashioned tale with all its parts spoken for.

A native son of San Francisco, Roger Herst has written nine novels, a series of scholarly articles and lectured extensively in academic and non-academic circles. He is an ordained Reform Rabbi with a doctorate in Middle Eastern History, holding undergraduate and graduate degrees from the University of California Berkeley, the University of Chicago, Johns Hopkins University and the Hebrew Union College. His home for the past 30 years has been Washington, DC where he lives with his physician wife. A son, daughter-in-law and two grandsons reside in Seattle.

When writing and delivering sermons from the pulpit, Roger discovered a curious fact about his congregants. A small number were moved by spiritual messages and a somewhat larger number by sermons filled with amusing facts. But almost all seemed focused on the stories and tales he enjoyed telling. This experience caused him to develop a passion for stories, learning how they were most successfully constructed and best delivered. His novels (including Destiny’s Children and Status 1SQ) are what he calls “sustained stories,” generally a series of episodes which resolve toward a climatic ending that is not obvious to the reader as the episodes unfold.

Roger approaches his hobbies with the same passion he devotes to his novels. Once a collegiate tennis player at Berkeley, he continues to hone his game both competitively and non-competitively. His musician/composer father bequeathed to him a 110 year old Steinway along with the ability to write music and play the piano by ear. Outdoor time is spent jogging along the C&O Canal flanking the Potomac River and fly-fishing wherever a trout or bass might be raised. Between these pleasures he loves to curl up with a good old-fashioned novel that sports a robust plot and believable characters. In non-fiction his interests tend toward history and science. For over forty years he has devoured both the New York Review of Books and Scientific American from cover to cover.

Gifts for Dads and Grads