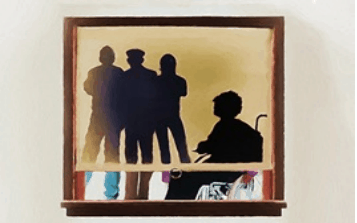 How do people who love each other keep their differences from tearing them apart? What does it mean to be a patriot, and can you be one if you don’t agree with what your government is doing? These are some of the many key questions pondered in SHADES, the new play written by Harvard psychologist Dr. Paula J. Caplan and premiered in New York November 9th. In this multi-award winning play, the moving and powerful story – which has been described as “Eugene O’Neill meets ‘All in the Family’” because of its combination of drama and humor — revolves around four people in Springfield, USA. Val, a nurse whose husband has recently died, has come to visit her father, who is about to retire from work that has defined him, and her brother, who is plagued by a mysterious illness after fighting in Vietnam. While visiting, she goes to work as a home nurse for a Black woman who is paralyzed from the neck down.

Val is torn apart by a dark secret and desperately tries to figure out how to balance her own instinctively caring nature with the reticence of her family to share their feelings about relationships, politics, and matters of life and death. Don, her brother, battles with what to do about his increasingly debilitating illness and tries to keep her at a distance while increasingly needing her help. Jerry, her father, struggles to care for his children while grappling with his imminent retirement, grief over the death of his wife, a wish to believe that Don will survive, and the suddenly salient question of how much to trust one’s government. June, the woman under Val’s care, while coping with her disability and her husband’s desertion of her, tries to find her own way to live in a country that respects little about her, while striving to find inspiration to return to writing vibrant poetry.

Among the four, two crises – Don’s imminent death and June’s dearth of creative stimulation – cause powerful and healing re-alignments that bring tormenting secrets into the light and set the people free in life-changing ways. With unnerving frankness, SHADES addresses every compelling – and sometimes uncomfortable — question we’ve ever asked ourselves about our feelings about sex, race, life, love, death, and what it means to be a good American.

It might seem lofty or even impossible to have a drama filled with humor that addresses the topics of sex-based emotional differences, racial disparities and racism, and struggles between family and friends all at once, but Caplan’s professional experience more than prepares her deftly to tackle each theme. She has done extensive work on feminist matters, particularly in the way that therapists pathologize women’s behavior far more than men’s. As for race, Caplan helped lead a study at Harvard where more than 200 students from racialized groups were asked about their experiences at four varied universities. She has worked extensively on people who have been traumatized and how they are able to find tranquility, meaning, and happiness. Dr. Caplan has come to the unavoidable conclusion that cycles of hurt never end until people are able to speak up, to raise the “shades.” And connection, love, and a creative spirit can make that possible.

The play has received first prize in both the NYC Pen & Brush Inaugural Pen Contest and LA’s LDI Productions New Plays Contest and has garnered Honorable Mentions in the Writers’ Digest Contest and New York’s New Works of Merit Contest.

SHADES will be presented at the Studio at Cherry Lane Theatre, located at 38 Commerce Street in New York City through December 17, 2016.

Tickets are $39 available at http://www.cherrylanetheatre.org/onstage/shades

“The play truly shines…Exudes family love and harmony in the midst of tragedy and pain.” – Life in LA

ABOUT PAULA J. CAPLAN: Paula J. Caplan is a clinical and research psychologist, activist, advocate, playwright, screenwriter, lyricist, actor, and director. She received her A.B. with honors from Radcliffe College of Harvard University and her Ph.D. in psychology from Duke University. She is currently Associate at the Hutchins Center for African and African-American Research and spent two years as a Fellow in the Women and Public Policy Program of Harvard Kennedy School, both at Harvard University. She has been a Lecturer at Harvard, teaching Myths of Motherhood; Girls’ and Women’s Psychological Development over the Lifespan; and Psychology of Sex and Gender. She is former Full Professor of Applied Psychology and Head of the Centre for Women’s Studies in Education at the University of Toronto’s Ontario Institute for Studies in Education, where she also headed the School Psychology and Community Psychology programs, and former Lecturer in Women’s Studies and Assistant Professor of Psychiatry at the University of Toronto. She is the author of 11 books, co-editor of one book, and author of dozens of book chapters and articles in scholarly journals, as well as of numerous articles and essays in popular publications. She has given hundreds of invited addresses and invited workshops and done more than 1,000 media interviews. She is Producer of the documentary film, “Is Anybody Listening?” which won an Award of Exceptional Merit in the Depth of Field International Film Festival; won an Award of Excellence in WRPN Short, Tight, and Loose Festival; and is an official selection in Docs Without Borders Festival in the Human Spirit category. She received a Bronze Telly Award for her “Listen to a Veteran!” Public Service Announcement series.

ABOUT CHERRY LANE THEATRE: Situated in a landmark building in Greenwich Village, Cherry Lane Theatre serves as a vital lab for the development of new American works and a home for groundbreaking productions of both new and classic theater of the highest caliber. As New York’s longest continuously running Off-Broadway theatre, Cherry Lane has helped to define American drama, fostering fresh, daring, and relevant theater since 1924. For more information, please visit http://www.cherrylanetheatre.org/.

Check out our Betcity India review

Best Poker Hands ever played on a Casino

Are Slot Developers Important for players?