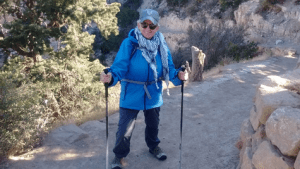 By Lora A. Lucero

Under my breath I was chanting “I think I can, I think I can!” in a good rendition of The Little Engine That Could. At 63, I wasn’t going to admit to anyone on the Grand Canyon’s South Kaibab trail that I feared I might have bitten off more than I could chew.

That day in early October was sunny and the Grand Canyon looked just like every postcard I’ve ever seen – perfect!  Nearly everyone I passed asked me if I was hiking alone. Although my first step was taken solo, I never felt alone. There were people of all ages going in both directions; everyone watching out for each other.

My notion of a peaceful, meditative hike was promptly discarded when I realized the trail was narrow, rocky and dangerous in many spots. My full attention was needed for nearly every step of the way.

The most arduous part of the hike down were the strong winds. I had to stop in my tracks for a few minutes to brace myself with my walking sticks.

Crossing the Colorado River in the late afternoon felt like a huge achievement until I realized Phantom Ranch was somewhere beyond. The National Park Service brochure estimates the hike down the South Kaibab Trail is 4-5 hours, but for me, it was 9-10 hours.

That evening when I took my boots and socks off, I saw the blisters. The skin on the tip of one toe completely fell off. At dinner in the mess hall, I sat next to a semi-retired attorney with whom I’d shared part of the trail. She whispered to me that she was celebrating her 81st birthday. Further down the table, a girl was also celebrating a birthday with her family. The staff brought out a birthday cake with candles and we all sang “Happy Birthday”.

My legs were cramping with currents of electricity when I climbed into my bunk. I took some aspirin and was asleep before the cabin lights were turned off. The next morning we heard the wake-up knock on our cabin door at 4:30 AM and someone announcing “5 AM breakfast”.

After breakfast, I headed out to climb the Bright Angel Trail. My feet were ready, the blisters covered with moleskin.

The Colorado River mesmerized. I took photos and imagined I was one of the early indigenous peoples seeing this mighty river hundreds of years ago. When I crossed it, knowing it was probably the last time I’d see it so intimately, I said a quiet prayer of thanks.

Then the climb began. It was another perfect day, with less wind and no aches or pains. I didn’t even feel my blisters.

Everyone who passed had something positive to share and words of encouragement. I met young people hiking rim to rim in a single day, others hiking for the pure pleasure of being in nature, and also riders on horseback.

About 1 PM I realized I probably wouldn’t make it to the top before dark. At about 3 miles from the top, my exhaustion set in.  I didn’t feel any pain, just very, very tired.

The trail gradient most of the day had been “manageable,” but closer to the top, it became steeper, like climbing a difficult staircase without the stairs or railings. And I was moving slower and slower.

A few moments after sundown I saw a woman, perhaps in her early 40s, walking down the trail full of energy and bounce. “I passed those guys ahead of you on the trail,” she said, “and they told me that you’re one bad ass lady!”  I was too tired to respond but when she offered to carry my backpack, I didn’t object.

Annette was the head housekeeper at the Bright Angel Lodge where she has worked for 20+ years. I’m sure she could have hiked the final 1.5 miles up the trail in less than an hour, but she stayed with me for the next 2 hours. We walked slowly, talking about family and much more. I tripped once, had difficulty breathing, and frequently stopped to catch my breath. We finally reached the top about 8:00 PM, thirteen hours, ten miles, and nearly 5,000 feet up from the bottom of the Canyon.

The next morning, I made a donation to the Grand Canyon Association in Annette’s name. With shrinking federal funds, our national parks are relying on private donations for trail maintenance, education, and basic research.