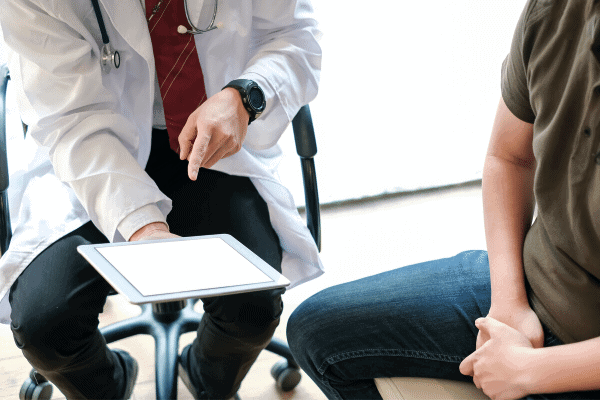 Once a patient has been diagnosed with prostate cancer, he goes through the informed consent process. This exists to educate the patient and guide him through an array of treatment choices.  As a urologist advising newly diagnosed patients, I strive to help make the choices for treatment understandable, including the risks involved, and to keep the decision-making process from becoming a confusing labyrinth.

Nonetheless, it is also important for the patient to exercise due diligence and seek out information from trusted and dependable sources.  For in the end, it is the patient’s body and ultimately the patient’s choice regarding what is “best” for him.

The Standard of Care for Prostate Cancer

The patient has a number of options to evaluate regarding how to manage or treat his disease.  Active surveillance is generally offered to men with low risk or low grade prostate cancer, as a substantial number of these men can go for many years, 10 or more, without needing treatment.  For intermediate, or high risk disease however, treatment is almost always necessary.

The therapeutic options have historically been surgical removal of the prostate, termed radical prostatectomy, because the entire prostate is removed. Radiation therapy in various forms, from radioactive seeds to image-guided radiation therapy to proton therapy is another frequently used option.

Surgery is the most common form of treatment for prostate cancer and is generally recommended for high risk disease. High risk patients have recurrence rates as high as 35 percent and will need combination therapy — surgery and radiation.  If combined therapy is needed, men should have radiation following surgery, not before, because of the damage radiation does to benign tissue and to the healing process.

Finally, thermal therapies, most traditionally freezing and destroying prostate cancer cells through a technique called cryosurgery or cryoablation have been used as well.

The Possibility of Treating Only the Diseased Portion of the Prostate

Historically, trying to treat only part of the prostate, or subtotal treatment, had not been possible due to the deep anatomical location of the organ. Therefore, total destruction or removal of the prostate has been the “medical law of the land” for many years.

However, with the advent of active surveillance and the realization that if technology made it possible we would treat only the diseased portion of the prostate.  Therefore, subtotal treatment became worthy of consideration.  At first, this concept was not looked upon favorably, but is now embraced by a substantial portion of the urologic community.

One of the leading technologies for subtotal treatment is high intensity focused ultrasonography (HIFU).  HIFU, which ablates the prostate by heating and destroying the diseased tissue, was approved by the US Food and Drug Administration for prostate tissue ablation in 2015. HIFU was initially used for whole gland ablation, and has been proven effective for over two decades in Europe, and other regions around the world.

Today, with subtotal treatment of the prostate, the urologist can use HIFU to perform a hemi-ablation (treating half the prostate), or focal therapy (treating focal areas of disease), especially those identified by MRI with no other areas of disease, or multiple focal areas identified by MRI that can also be treated focally.  The newest generation of HIFU, Focal One, makes possible for individualized and flexible treatment planning to avoid ablating the entire prostate.

Hemi-ablation or focal therapy offer a chance to avoid the possibility of injuring both sets of neurovascular bundles that assist in male sexual function. If we only treat one side of the prostate, the other side not being treated clearly protects the nerves on that side.  So the risks of erectile dysfunction and leakage of urine goes down significantly with less than total gland ablation.

Also, if the cancer recurs, the patient can either be retreated with HIFU, or return to surgical removal or radiation of the entire prostate to accomplish the goal of a cure.  In essence, the patient should not be overly concerned that they have burned a bridge by undergoing focal therapy.  However focal therapy is not appropriate for men who have high volume or bilateral disease. They are often best served by having total gland ablation.

For patients who have low grade prostate cancer on one side but intermediate grade on the other side they can avoid having the whole gland treated, also known as treating the index lesion.  As mentioned earlier, low grade disease is generally followed through active surveillance [in this U.S]. Therefore, it is possible to treat the area of the prostate that shows the higher grade disease, but follow the lower grade disease as though the patient were on active surveillance.

Again, the informed consent process should help guide a patient through all treatment options, including subtotal ablation, with a clear understanding of each approach.  Urologists can and should discuss why hemi or focal ablation may or may not be a good choice for them and why more aggressive or total ablation is necessary.

Dr. Miles is a board-certified urologist, and vice chair of the department of urology at Houston Methodist Hospital, with vast experience in the management of prostate cancer.  He is also professor of urology at Weill Cornell Medical College of Cornell University and Baylor College of Medicine, both in Houston, TX.