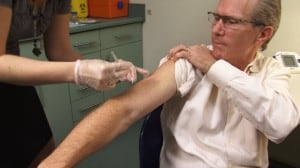 Influenza—more commonly known as the flu—continues to be widespread throughout most of the U.S., prompting health officials to encourage anyone who hasn’t been vaccinated already to get this year’s flu vaccine.

According to the Centers for Disease Control and Prevention (CDC), it’s likely that flu activity will continue for some time.

“While we can’t say for certain how severe this season will be, we can say that a lot of people are getting sick with influenza and we are getting reports of severe illness and hospitalizations,” said Joe Bresee, MD, a medical epidemiologist with CDC’s Influenza Division.

In typical years, the flu kills thousands of Americans. Those most likely to develop flu-related complications include:

Already this season, 20 pediatric deaths have been reported, according to CDC.

Currently, CDC recommends a yearly flu vaccine for nearly everyone 6 months of age and older. However, as of mid-November, only about 37 percent of the U.S. population had been vaccinated this flu season.

Generally, the earlier vaccination occurs, the better. But even now it’s not too late. While taking steps such as avoiding others who are ill and frequently washing your hands may lessen your chances of contracting flu, officials describe getting the flu vaccine as the “single most important step you can take to protect yourself.”

It’s possible to get vaccinated and still come down with the flu. But analysis shows that this year’s vaccine is 62 percent effective, meaning that those who get it are 62 percent less likely than they otherwise would have been to get flu that required a doctor visit. That’s a significant public health benefit, CDC doctors said.

People who develop flu symptoms and are very ill or at risk for flu complications are encouraged to see their doctor—and soon. Antiviral medication may lessen the flu’s severity and possibly prevent hospitalizations and deaths—especially if given in the first 48 hours after symptoms start.

The spread of flu is unpredictable and can change over time. But you can learn more about the current flu season and flu activity in your area at www.cdc.gov/flu/weekly..

Find a Rehab Facility in Denver