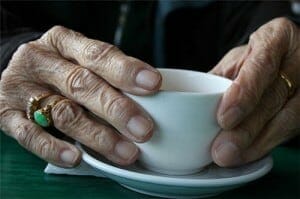 Jim Cordy’s race against time is symbolized by the foot-high hourglass he often carries. Just as the grains of sand flow from the upper chamber into the lower chamber, the neurons in the upper chamber of his brain relentlessly die.  The question he often asks is will the cure come soon enough for him?

Jim, of Pittsburgh’s Squirrel Hill neighborhood, has Parkinson’s disease, a progressive disease of the central nervous system.  In one part of the brain, nerve cells produce dopamine which transmits signals that let the body’s muscles work smoothly. With Parkinson’s, these nerve cells gradually stop producing dopamine.

Parkinson’s affects over 1.5 million Americans.  Symptoms include: shaking, slowness of movement, stiffness, and impaired balance. Since these symptoms occur later in the disease, secondary symptoms may actually be the first sign of Parkinson’s. Two of these occurrences are small, cramped handwriting and a decrease in facial expression, called “masked face.

Although the incidence of Parkinson’s is highest in people over 50, many people are diagnosed in their 30s and 40s, says Jim who was diagnosed when he was 40.  Since then, he has become a vociferous advocate for increasing Parkinson’s research funding.   When he first approached Congress in 1994, the National Institute of Health was spending $24 million per year on Parkinson’s disease research.

“That wasn’t enough,” says Jim who was determined to begin a grassroots campaign to quadruple that amount.

Armed with startling statistics and his hourglass, he met with 100 legislators in his initial visit to Congress.

“I used the hourglass for three reasons,” he explains.  “First, to prevent me from talking over my allotted 5 minutes I had to spend with them.  Secondly, I wanted the legislators to remember me, and finally to remind everyone I met with that time is slipping away.”

In 1999, the Udall bill was passed, authorizing $100 million per year for Parkinson’s.   The bill was named after Mo Udall, a member of the U.S. House of Representatives, who was diagnosed with Parkinson’s disease in 1979. He died in December 1998.  Udall had the most severe form of Parkinson’s, says Jim.  He was unable to speak or move and became a prisoner in his own body.

In 1995, Jim founded the Parkinson Chapter of Greater Pittsburgh.   The chapter maintains regular contact with nearly 6,000 households whose members have received services and/or given donations.

Leonard Muzyn of Ross Township has benefited greatly from the chapter since he was diagnosed in 1999.  He regularly attends the Parkinson Wellness Program which was started by the chapter.

The program is a combination of physical exercise and socialization tailored to the needs of people with Parkinson’s.  Scientific evidence indicates that regular exercise can slow the progress of the disease.

“Exercise can prolong it,” says Leonard.  “Medication helps, but exercise is more important.”

Irv Popkin, a board member of the Parkinson Chapter of Greater Pittsburgh who resides in Mt. Lebanon, a suburb of Pittsburgh, agrees.  “I work out almost every day.   Keeping your muscles exercised and being active is important.   It’s also good for your attitude.”

Groups meet twice weekly from 1 to 2 ½ hours of exercise and occupational and recreational therapy, supervised by licensed therapists. Based on the interests of the participants, activities may include crafts, bowling, and games of memory and logic.

The chapter opens their sixth site in the North Hills this summer.  Leonard, who now attends the Squirrel Hill site, admits he has mixed emotions.

“I’d hate to leave behind some of the wonderful, beautiful friends I’ve met,” he says.  “However, the new site will be much closer for me.”

“It’s a positive, fun thing to do,” he says when asked why he became involved.  Irv also started the Fantasy Walk a few years ago which raises approximately $30,000 annually for the chapter.

Other services and program offered by the chapter include:

Jim, Leonard and Irv have similar advice for those who are diagnosed with Parkinson’s.

“Fight it,” advises Leonard.  “Fight back and try be positive.”

Irv adds: “You need a positive mental attitude to beat this disease.  You also need to understand it.”

He says that when he found out he had Parkinson’s, the first thing he did was to avoid the terror of the unknown.  “I went to the library to read up on the disease.  I also became involved with the local Parkinson’s chapter.”

Not surprisingly, Jim recommends that if you have Parkinson’s, call your local congressmen and urge them to continue to support funding for Parkinson’s research.

“I can’t understand why more people aren’t active.  Write to them.  It works,” he says.  “We will have a cure for this.”

Leonard has no doubt as well.

“I’m a firm believer that they will find a cure,” he says confidently.  “And if we hang on long enough we’ll all benefit.”

Want to learn more about Parkinson’s disease, we recommend that you check out Thumbs Up!: Staying Positive with Parkinson’s Disease