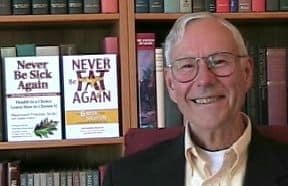 Health authority Raymond Francis tells us “a genuine cure for cancer is easily accessible now.” In his revolutionary 2011 book Never Fear Cancer Again (Health Communications Inc.), Francis tells us that conventional medicine looks at cancer from the wrong perspective and asks the wrong questions. For example, Francis identified a deficiency of oxygen metabolism inside of cells as the prime cause of cancer. Now a new study in the Journal of Molecular Cell Biology reaches the same conclusion. The researchers found low oxygen levels in cells, or hypoxia, may be a primary cause of uncontrollable tumor growth.

“This explains why conventional cancer treatments don’t work,” Francis says. “They do nothing to improve oxygen metabolism in the cells, and in fact, they decrease oxygen metabolism, making matters even worse.” Simply increasing how much oxygen you take in or breathe is not the answer. Increasing the concentration of oxygen in the body is the key; this can only be accomplished by using a hyperbaric chamber under a medical professional’s supervision.

There are other things you can and should be doing to achieve a cancer-free life, according to Francis. “Eating better will make you feel better, and having a better outlook is one of the best defenses against cancer or any disease,” he says.

“Keeping a healthy outlook is both one of life’s great challenges and one of life’s great opportunities.  Having a purpose, a higher meaning to your life than mere existence, is a critical part of the whole picture of health,” Francis wrote in his first book, Never Be Sick Again.

Another conclusion about living cancer-free runs counter to conventional wisdom as well, but Francis is confident that research will back up this advice, too: get out in the sun more, not less, he says. Sunlight helps the body produce more vitamin D, which is important in cancer prevention. It also increases production of hormones that prevent anxiety and depression and stimulates production of both protective white blood cells, strengthening immunity, and red blood cells, which increase the oxygen content of our blood.

“The bottom line is cancer is not a scary, uncontrollable monster,” Francis concludes. “Cancer is a biochemical process that is now sufficiently understood so that almost all cancer can be prevented and reversed.”

Francis is an MIT-trained scientist and an internationally recognized leader in the field of optimal-health maintenance. In addition to being a best-selling author, Francis is the creator of the internationally-presented Beyond Health Seminar, author of the “Pathways to Health” newspaper columns, and has been a guest on more than 1500 radio and television shows.